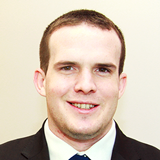 I started as a Technology Analyst and during my first year, had the opportunity to be involved in two very different projects. I was exposed to several new technologies which have helped me further apply and expand my knowledge

I joined BearingPoint after completing a Computer Science Honours Degree from Dublin Institute of Technology. I started as a Technology Analyst and during my first year, had the opportunity to be involved in two very different projects. I was exposed to several new technologies which have helped me further apply and expand my knowledge and the skills I acquired during my degree.

Currently, I am a junior Java developer on a comparatively small Agile Scrum team comprising of six members, of which there are three developers. Our team is involved in designing and implementing a solution for a client in the public sector. I contribute towards analysis, design and implementation of the solution.

BearingPoint has been an amazing opportunity for me, as a graduate of a Computer Science degree. I have received many practical and hands-on opportunities to apply my skills and have had them greatly improved through exposure to new technologies and methodologies. BearingPoint is a generous and rewarding company to be a part of, with a very friendly and positive office atmosphere.

BearingPoint invests a lot into their staff regarding career and personal development. They are a company that recognises each employee as a named individual and will offer any assistance in helping employees define their career goals and objectives.

After only a few months within the company, I had the invaluable opportunity to take part in an all expenses paid, firm-wide, week-long intensive consulting skills course in Berlin called BearingPoint School.

Being an Agile Scrum team, we employ a two-week sprint routine. Once every two weeks the full team meets to discuss, plan and decide on the tasks for the next sprint iteration. The tasks decided upon are derived from the user stories that the client requests as the objective business requirements of the project. As a team, we analyse and investigate the requirements and mutually agree on the estimated effort required.

My day-to-day work then involves a morning ‘stand-up’ where each member of the team gives an update on their task progress and their project relevant plans for the day. We also identify any issues that are blocking success. The rest of the day then involves the investigation, design, implementation, testing and eventual completion of open assigned tasks.

BearingPoint encourages and contributes towards the ‘life’ side of work-life by contributing generously to the Sports and Social Club which provides a well organised and diverse variety of monthly activities through the club.

In my own time, I mostly enjoy distance running, listening to hard rock or metal music and attending concerts when I have the chance. I have a thriving interest in tasting, discovering and brewing craft beers.